from Tomorrow’s Child Magazine – May, 2021 | by The Montessori Foundation

After the second of three children left for college, we began to experience the initial feelings that may come with the reality of being empty nesters. We still have one incredible teenager in the house, and she is very “easy on the adult.” Her presence in the home stands in the gap between a sense of family and lost purpose; we love her very much.

My youngest daughter has learned, from the mistakes of her two adult siblings, precisely how to navigate parental waters without being eaten by sharks. She is calm, introspective, caring, and makes good grades. After some time, she began to experience the throws of loneliness not having her older brother and sister readily available for age-appropriate interactions and mental stimulation. And so, she did something she does not often do. She asked for something.

You have to understand that this is a profound development for our youngest child, as she only ever asks for what is necessary. She began asking her mother for a dog. Initially, she began implementing the divide-and-conquer method of asking mom only. Her mother refused, citing the fact that I (her husband) was incredibly allergic to pet dander. I explode into sneezing fits and watery eyes when I come in contact with pet fur of various unknown types. 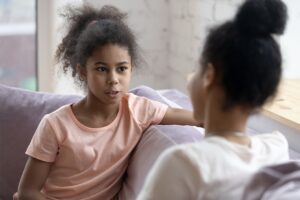 My daughter’s initial attempts to secure a dog friend were all nonstarters because the acquisition of one would make her life grand and mine miserable.

More time passed, and she began to implement the teen strategy of persistence. She asked us almost every day, as often as she could, explaining to us the various reasons why a small dog with small poops would greatly improve her life and emotional standing. After months of straight refusals, our patient, kind, loving, low-maintenance, and temperate little daughter began to implement the final solution. To seal the deal, our child began to have bouts of crying in order to secure her desires. She no longer asked for a dog, specifically, but simply cried to us about not having someone or something in her life to help occupy her time and curb the experience of single-child loneliness. I should mention that there is an eight-year gap between our middle child and our youngest daughter.

Without her knowing, she hit the jackpot; we as her parents had always observed the chasm that existed between the two older children, and our youngest child. As the years went by, we watched as the socio-emotional distance between the two older children (only a year apart) began to naturally grow, and the expanse between the two camps naturally widened. I knew, as weeks and months went by, that I would grant her a wish for a dog. After all of her attempts to implement “teen reverse psychology” and “emotional guilt,” we decided to capitulate, despite the constant discharging of her best physiological weapons of teen warfare. We began to prep her for ownership of the dog without letting her know that we intended to let her have a dog. When she would cry about the matter, we countered with anecdotes concerning the horrors that may follow like cleaning up poop, early morning pee-pee trips, walking the dog in the wee hours of the morning, the darkness of the backyard, contending with the night-time critters, and constant supervision. All of these possibilities fazed her naught, and she maintained the fact that she wanted a small dog, even if it meant waking up at the crack of dawn.

When she had successfully endured the gauntlet of situational, anecdotal objections laid down by me and my wife, we agreed to a non-allergenic breed AND that she would take full responsibility for the care of the dog. My wife and I love dogs, but we are clearly not “dog lovers.” These cautionary tales that we were giving to her were not being explained by any way of fault toward the K-9 species, but rather, the apprehensions of people such as my wife and me. However, our child convinced us that she would be able to handle the responsibility as the primary caregiver to this new life in our home. Then came the day that we brought her pet dog home. It was a one-year-old Chihuahua puppy from the rescue shelter. She took to him at once and named him Oliver, Ollie for short.

From day one, she exceeded our expectations of care and attention in every single area. She had said that she would not falter or wane in her affections for the dog as time transpired. We were not disappointed: walks at early dawn, walks at dusk, and three walks in between. Lovingly dealing with feeding times, poops, and pee-pee accidents without complaint. She lavished him with treats and biscuits, walks, and selfies; she even made a short film on her iPhone, which was actually quite impressive, editing and all!

I want to be honest about how things have progressed in our situation. Today, our daughter is secretly in anguish. I would not say regret, but definitely anguish. Although there is no doubt that she loves Ollie a great deal, she does not like getting up at dawn, cleaning up accidents, late-night walks, the night sound of shuffling critter paws among the leaves, beyond the reach of the backyard floodlights. She would rather not stand in the cold rain to make sure (by eyewitness account) that he has carried out a number one and two. She hates walking the dog on hot summer nights, cold mornings, and in between. No matter the situation, she does what she has to do to make Ollie’s existence with us a good one. She plays with him, and gives him a lot of attention as we all do. My wife and I lovingly sneeze and cough through my encounters with Ollie, without complaining.

I suspect that like any 14-year-old child, the responsibility for my daughter is hard work. The REALITY has set in. The reality of caring for another life has been a real wake-up call for this little lady. We help out as parents often do, but we do not take over as parents also often do. For my daughter, getting up early and traversing the cold or heat of the day may be a challenge. Taking a plastic glove and handling the solid waste of an animal may be yucky for her. Finding time to play with Ollie in the midst of her other obligations is not always easy for her, but we let her go through it. We let her go through it, without bailing her out, without being a crutch, without allowing her to abdicate the responsibility that she asked for, and she has grown a great deal in light of it.

Michael Crump and his six siblings grew up together in the UK. He received a BA in Sociology/Education from Ashford University. Michael attended Manhattan College for two years and lived in NYC for 16 years. After working in corporate management for 25 years Michael decided to join his wife, Arlette, as a teacher at her school, the Montessori Village Academy in GA. He is now completing his Montessori Elementary Teacher Certification in an IMC training program. Michael and Arlette have three children – Isaiah and Morgan in college and Mattison a working actor in high school.