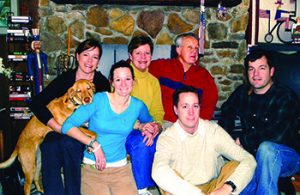 In November of 1974, young father and husband Herk Exline was just launching into a career in the family printing business, and the dreams of a parent of a blossoming ten-month-old daughter who was the “apple of his eye.” His wife, Kris, had just learned that they would be having a second child in June. Returning from a hunting trip at his family’s cottage in Canada with his best friend, their car was hit head on.

In an instant so many lives were changed forever. Herk’s friend was killed instantly, and Herk was in critical condition with a traumatic brain injury. He remained in a coma for months, finally returning to a hospital closer to home where daily visits became ‘normal’ life for Mom and baby. When Herk was able to go home, Kris was determined to find activities that would stimulate his memories, his speech, his ability to walk, and to sharpen his awareness of his surroundings.

When Cathy turned three and Paul eighteen months, Kris enrolled them at Solon Montessori School (Cleveland, OH), run by Mildred Gunewardena and her daughter Nelun Rajapakse. “Mrs.G” received her Montessori training directly from Maria Montessori, and Nelun with Mario Montessori. What angels these two women were for the young family! With their gentle demeanor and total respect for the child’s opinions, Mrs. G and Nelun encouraged a different approach to the traditional American parent/child relationship. Parents were encouraged to lead by example, not by authority. In turn, the children would have the freedom to discover for themselves the adults they would become.

One day Mrs. G met Herk and suggested that he meet with her after school. She believed that Montessori methods and materials could awaken his senses as they did with the young child. Days turned into weeks, and Herk was using sandpaper letters, sound cylinders, listening to poetry, beating rhythms with his hands, and so much more, stimulating not only his intellect but his physical deficits. Herk was learning to speak more clearly, repeating sounds, and matching pictures to appropriate words. He stretched out his arms holding onto longer and longer lengths of red rods. He worked with stacking the pink tower, learning sequencing.

Eventually Herk’s family grew to four children, and a commitment to the “Montessori Way” became the family’s way of life. Each child continued their Montessori schooling through eighth grade at Ruffing Montessori School. Herk was able to remain at home and to be a part of their daily activities. He and Kris credit the time spent as an adult in the Montessori classroom with adding to his return to daily living with senses and awareness more attuned to his surroundings.