LET’S GET OUT OF THE WAY – DON’T OVER-PARENT; EMPOWER YOUR CHILDREN INSTEAD! 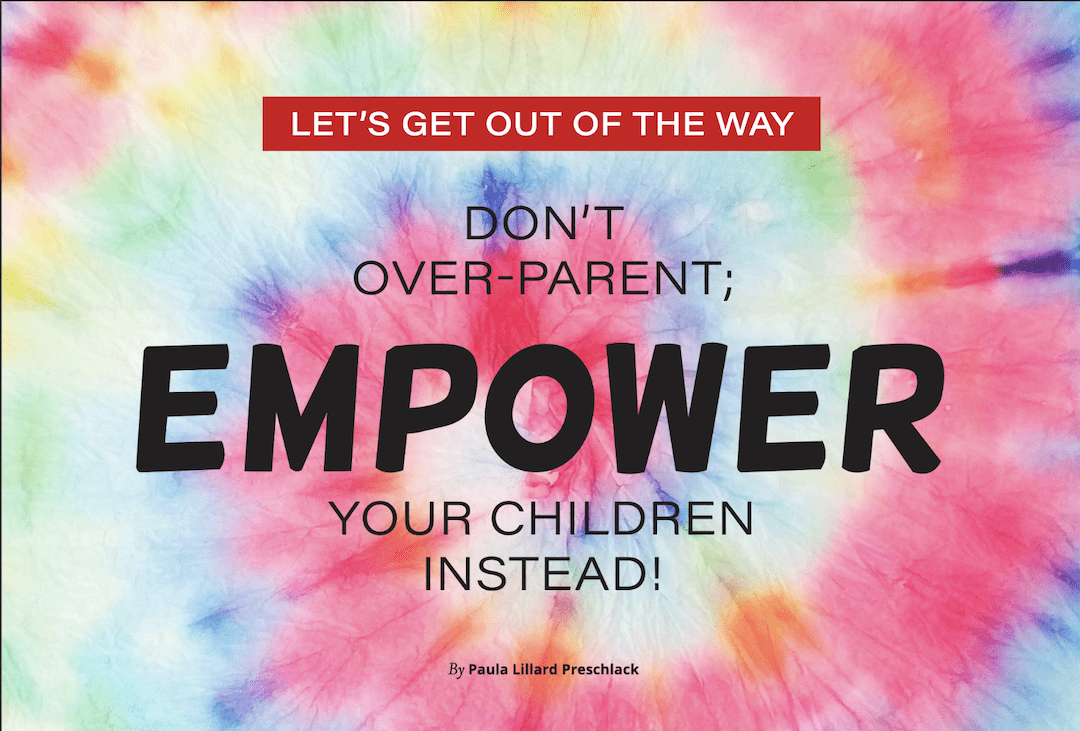 My college roommate visits me with her two teenage sons. She confides that she is worried that her 15-year-old isn’t working hard enough in school and “might be making poor choices about partying.” In our cabin kitchen, only moments later, I watch wide eyed while my friend takes the butter knife out of her son’s hand, pushes him aside, and says, “Here, let me make your sandwich. You have no idea what you’re doing.”

Have you ever seen this kind of interaction? Here’s a 15-year-old who isn’t allowed to make his own, albeit sub-par, sandwiches, but he’s expected to make responsible decisions about schoolwork and partying; and a parent, wanting nothing but the best for her son, who inserts herself into his attempt to make a sandwich, not seeing how doing so relates to his “poor choices.”

Many children are given the message — in small, seemingly benign ways — that they are not capable of making their own choices and developing independence. By not allowing children to try things and learn from their mistakes, we become obstacles to their growth. We become, according to the popular phrase, “helicopter parents.”

Helicopter parenting, a term coined by psychologists Jim Fay and Foster Cline in the 1990s, describes the too-common tendency to hover and interfere in children’s actions and decision making. As parents, we do this so regularly that most of us don’t even realize we’re doing it. Some may even feel as though something is amiss if we aren’t involved in our children’s business, because we see so many parents self-assuredly “hovering about.” For instance, a friend of mine recently dropped her daughter off at college and noticed that other parents set up their children’s bedrooms. She felt guilty driving away, even though her daughter told her she wanted to set up her own room. My friend had raised an independent young woman, but on that day, she wondered whether she was being a “neglectful” mother!

In How to Raise an Adult: Break Free of the Overparenting Trap and Prepare Your Kid for Success, Julie Lythcott-Haims explains this phenomenon of unnecessary parental interference and ways to address it. While working as the dean of freshmen at Stanford University and raising her own children, Lythcott-Haims noticed the alarming “lack of purpose” many college-aged students reported feeling. She saw a causal link between overly involved parents, who made too many of their children’s decisions for them, and these college students, who were out of touch with their own desires, interests, and capabilities. Therefore, right when they should have been feeling the exhilaration of finally being out on their own, these young adults felt lost.

In The Gift of Failure, middle school teacher and parent Jessica Lahey shows how overprotective parents do everything in their power to keep their children from failing. Thus, they inadvertently take away their children’s opportunities to learn to solve their own problems. In her book, Lahey urges parents to allow their children’s little mistakes, such as forgetting homework or lunch money, to be the natural teaching moments that they are; when children are supported to think for themselves and adjust their behavior to improve their success, they learn that small failures are nothing to fear. In fact, this is how they naturally become independent.

In Grit: The Power of Passion and Perseverance, Angela Duckworth convinces us that when our children learn to get up again and again; after setbacks, they develop grit and determination. Duckworth’s anecdotes and research show that people succeed because of their perseverance and passion for their work, not because they were endowed with great gifts or had their paths smoothed over by hovering parents. It takes practice and experience to learn that hard work, struggle, and failures are all part of a successful journey. Therefore, it is important to allow our children to experience the natural ones that come their way.

Each of these authors agree that childhood is the time to practice making mistakes and solving small problems. The research is out there: Over-parenting cripple’s children, while supporting their independence leads to their success.

So if we have all this evidence and good advice, why is it so hard for us to follow it? We all want our children to grow up and become happily independent from us; no parent deliberately sabotages this process, and many are familiar with the messages in these books. But there may be a lack of practical advice on how to raise children to be independent, especially in this wave of helicoptering. Stepping aside to let our children learn from their experiences is counter to the parental mindset of our culture. We feel so responsible, we want to make sure our children succeed, and we care — though it’s hard to admit — what other people think. It isn’t easy to find the path to raising an independent child.

But the main issue, I believe, is that we approach parenting from an ingrained schooling model of “adult as teacher/director” and “child as learner/receiver.” This implies that helping children develop means directing them in their actions; however, the more an adult directs, the bigger an obstacle to a child’s independent thinking — and actions — he becomes. Therefore, another approach to education and parenting is both helpful and timely.

Finding an Approach that Works

As a parent and a teacher for more than twenty years, I’ve found the Montessori approach to be the most effective way to foster independence. This approach gives us both a framework for understanding child development and practical advice for supporting children from a very early age. Maria Montessori, who graduated from the University of Rome as a medical doctor in 1896, became accomplished in studies of anthropology, psychology, psychiatry, and philosophy. Montessori was a deep thinker; she studied the varied work of others and made astute observations of young children. Montessori noticed (with surprise) that children as young as three-years old were most attracted to learning the very skills that would serve them well, such as language and life skills. She found that when adults stood back — did not interfere or dominate — the children learned through their interactions with the environment, almost as if they were teaching themselves.

What made stepping aside possible for Montessori was her specially prepared school environment, which enabled children to learn through their own experiences. Her second ingredient was providing an adult who acted as a guide for the children rather than a lecturer or a director. Specifically, the teacher modeled how to work productively with Montessori-designed teaching materials within the boundaries of responsible behavior. As the students were supported to pursue their interests, they learned and became able to do far more than was expected, even by today’s standards. This happened repeatedly in Montessori’s observations and continues to happen in Montessori schools around the world today. The good news is parents can follow the basics of this approach at home by focusing on preparing the home environment for their children’s independence, showing them how to do things for themselves, and giving them freedom with boundaries of responsibility.

While working at Forest Bluff School in Lake Bluff, Illinois, I have been helping parents set up their homes to foster their children’s autonomy from infancy to adolescence. When I talk to parents about how to do this, I explain that it is a paradigm shift in our thinking. We need to shift our attention away from controlling and directing our children and onto preparing an environment that allows them to meet their own needs. This automatically changes the dynamics of the parent-child relationship. Children whose parents stay out of their way, wherever possible and appropriate, but who then model and provide the necessary boundaries and support, become far more confident and capable in every area of their lives.

To provide an environment that supports your children’s independence, begin by looking at the setup of your house. For example, let’s say you are the parent of a five-year-old and a three-year-old, wanting to start them on the path to making their own breakfasts. First, prepare a small pitcher of milk, roughly five inches tall, two bowls and spoons, and a small plastic container with two servings of cereal in it. Cut strawberries and leave them in a bowl with an adult-size spoon, which will act as a serving spoon to small hands. Set these items out on a low, child-sized table. Examine each item carefully to ensure that the children can manage them successfully; the table should come to their waist height, the plastic container should be soft enough to peel open easily, and everything should be sized to a child’s small hands.

The stage has been set. The low table is waiting for the children to come discover it, with all they need for breakfast. Your preparations say, “This action of getting breakfast can belong to you. You are allowed to do it. You can use these things and fulfill your own needs.” See what happens when your children enter the kitchen and find this little table prepared for them and, as necessary, help a little by showing them what to do. If you do this each morning, your children will get the hang of it and become increasingly independent.

Why does this work? Maria Montessori recognized that there is this innate spirit in very young children that makes them want (desperately) to do things, and this desire is what it means to be active, to feel useful, to be human. We are feeding that spirit when we prepare the environment and show children how to do things for themselves. The important point here is that our goal goes beyond cutting strawberries and getting breakfast. The development of a confident and thinking individual is the real goal. The activity of preparing one’s own breakfast is a means to reach that goal.

Children Grow by Their Own Efforts

Our children build and form themselves. It is not something that we do to them, but which they must do — and want to do — by their own efforts. This is the parenting mindset — the paradigm shift — that Montessori proposed with her approach. By getting ourselves out of the way, we encourage our children to have a direct relationship with the realities and consequences of their immediate surroundings. A natural process ensures that they learn through both the successes and mistakes they make along the way. Children raised with this approach learn to be responsible, make healthier choices for themselves, and are more confident, secure, and happy.

So, land your helicopters, parents, and put your energies into preparing the environment, modeling, and giving freedoms with responsible boundaries to your children. They can accomplish many things for themselves when we adults do our jobs and let them do theirs. Watch them take off! •

Paula Lillard Preschlack is a writer and a speaker. She has spent 25 years as a teacher and the head of school at Forest Bluff School. She is currently working on a book about Montessori education. Her work focuses on the principles and successes of the Montessori approach learned from over 25 years of teaching and observing children from birth to adulthood.

Paula is a graduate of Hampshire College and has a Master’s Degree in Education from Loyola University, Baltimore, MD. She is AMI certified for all Montessori age levels: Assistants to Infancy; Primary; and Elementary, and she audited the NAMTA/AMI Orientation to Adolescent Studies in 2018. Paula is married to Jim Preschlack and lives in Lake Forest with their son, Stanley (age 19), and daughter, Lillard (age 17).

Return to Table of Contents
Click here for access to much more. Join the Montessori Family Alliance