The Courage To Be a Montessori Parent 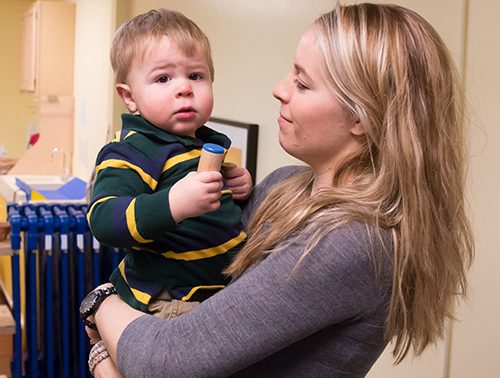 As a Montessori parent, you’ve probably heard many statements like those above, and you can probably add a few of your own. These remarks often are expressed by parents to other parents. Sometimes they come from well-meaning relatives, co-workers, neighbors, and just about anybody who knows you have a child in a Montessori school. When it comes to Montessori, it seems that everyone has an opinion.

When my children first started Montessori many years ago, I heard the statement “It takes courage to be a Montessori parent.” I used to believe that it took courage because Montessori was an experimental program to which I was offering the use of my children as guinea pigs. As I became better informed, I quickly discovered this was not the case. Montessori has actually been around for over one hundred years and has been proven successful in many different educational environments throughout the world.

So what does it mean “It takes courage?” Maybe it’s because Montessori tends to encourage children to think for themselves and articulate their own opinions. This is all wonderful, but as a parent, there are moments when it would be a whole lot easier to deal with a six-year-old who blindly and obediently accepts your explanation for why you don’t want to create a recycling center right in the middle of your kitchen or a four-year-old who announces that she knows where hamburger really comes from and she’s never going to eat it or any other animal ever again, period!

That must be it, I thought. It takes courage to live with these self-actualized, intelligent little creatures that have been encouraged by Montessori to think logically and express their opinions. I stuck with this understanding of the “courage” statement for a number of years. As a parent of two children who grew up in a Montessori school for ten years, I’ve got a million examples of a Montessori mother’s courage in action, but that’s the subject of another article.

As my children got older, I came to understand the courage statement in a whole different light. About the time that my children hit kindergarten, I found myself constantly defending my choice to keep my children in Montessori through the elementary years. The opinions of relatives were the most difficult and the hardest to discount because they came from people who were legitimately concerned about their grandchildren, or nieces and nephews. A case in point. My husband went to a New England boarding school, followed by Yale, followed by medical school at Columbia. He later topped it off by obtaining a law degree. Observing his grandson working with little beads while lying flat on his belly during a visit to the school, it was clear from the bemused expression on my father-in-law’s face that Grampa Dan not only had doubts about Montessori, he also had doubts about us as parents.

The pressure can be enormous. There were many times when we were very tempted to walk away from Montessori and put our children into the capable hands of a more traditional school. After all, we turned out all right. Or did we?

Speaking only from my own personal experience, I question how we as a society have come to define “success.” Is a child who grows up to become a doctor or a lawyer any more successful than a carpenter or a musician or a teacher or a homemaker? Do well-intended parents unconsciously push their children into status careers that send out all the right messages that we as a society have come to accept as the true measure of success.

Does it matter to us that our child grows up to be happy with her choice in careers, that she has a sense of fulfillment every day that she goes to work, that she approaches each day of her adult life with the same enthusiasm and eagerness to grow that she experienced as a child in the Montessori classroom, that she is able to accept the challenges that life has to offer and has the ability to adapt to new ideas and technology, that she understands that whatever gifts of intelligence and ability she possesses they are truly gifts and that others have other abilities and gifts that are different from her own? If we as parents can answer yes to these questions, then I believe our children are well placed in a Montessori environment for as long as we are able to keep them there.

In designing the cover, we tried to find a provocative, and indeed a shocking way, to visually portray the question: Does Montessori prepare children for the real world? The cover has a great deal of personal significance to me for three reasons. First, the boy in the picture is my son. I can assure you he does not look like that in real life (see insert). Second, it is the first and possibly only time I have ever succeeded in getting him into a tie and jacket long enough to have a picture taken (my mother will be so happy). Third, and most importantly, as a young adult, I chose a career in law for all the wrong reasons.

I believed that becoming a lawyer would give me prestige and wealth. What it gave me that I hadn’t counted on was an ulcer and the nagging feeling that I should be doing something else with my life. Please don’t get me wrong. I don’t dislike lawyers (or tasseled loafers) — even trial lawyers are ok with me as long as I don’t have to join them in the courtroom. There is nothing wrong with the law, medicine, teaching, carpentry, or anything else as long as it is what is right for the individual.

I care about academics, but I know that my children will get them from any good school, Montessori or otherwise. For me, the true value of Montessori goes beyond academics. When I look at my own children, I see behavior patterns that are different from my own at their age. I feel very comfortable that Montessori prepares children for the real world. In an interview, David Kahn once remarked, “Montessori is the real world. It’s the dichotomy that’s false.” When you think about it, there’s a lot of sense behind that statement.

I often wish I could have had a Montessori experience as a child. Things might have turned out differently. For one thing, I could have saved all that money on law school, but then I really do believe that all learning experiences have value. Maybe a bit of Montessori did rub off on me after all. At the age of 35, I quit the practice of law and I’m now doing something I find much more fulfilling, something I probably should have done in the beginning if I had not tried so hard to jam my round-pegged personality into a square professional hole.

More than anything, I hope that we as parents will have the courage to recognize and continue to support the human values and life lessons that our children are learning in their Montessori classrooms every day. As for my children growing up to pursue some kind of yuppie career, that’s ok as long as it’s right for them. Our world could probably use a lot more Montessori lawyers, politicians, and doctors who understand that there’s more to life than being book smart. Above all, though, I think that as parents and educators we must never accept the premise that our objective must be to teach children to survive life. Better we should help them learn to celebrate it!