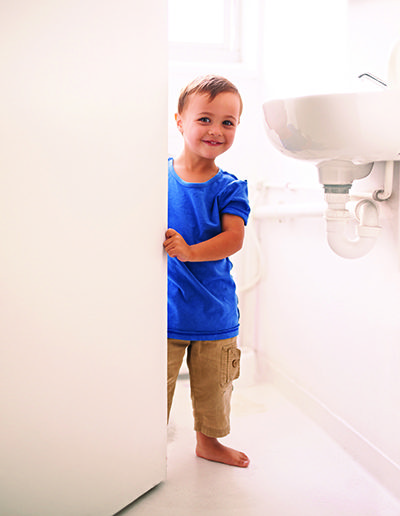 Editor’s Note: Several years ago, a Montessori parent wrote to us with concerns about the right way to help toddlers learn to use the toilet. She was quite frustrated and so was her child. We turned to our dear friend and toddler expert Susan Tracy, and we are reprinting this article after I went searching for it to help with my two toddler grandchildren.  —Joyce St. Giermaine, Editor

Toileting is accomplished most easily with preparation that begins far in advance of the time when the child is ready.

I believe that most Montessorians who work with very young children would recommend that parents put their infants in cloth diapers from birth on. In addition to the obvious environmental reasons, natural cotton fiber is kindest to the baby’s tender skin. Also, in preparation for later toileting, children can easily sense that they are wet and discover the cause and effect of their urination and the resulting feeling of wetness. This is the first step in helping infants prepare themselves for toileting when they are developmentally ready.

Around the age of twelve months, children often become quite interested in the bathroom. They want to explore, play with the water in the toilet and may persistently follow their parents when they go into the bathroom. These are early signs of the child’s first interest in toileting.

By the age of fifteen months, children often show interest in wearing underpants. Many become fascinated with the process of dressing and undressing and may undress when it would be least expected. It is not uncommon for children of this age to try on their older siblings’ or parents’ underpants. What may seem to be simply cute or attention-getting behavior is probably just another indication that they are becoming curious about toileting.

Between thirteen and fifteen months, many children will want to sit on the toilet or potty chair in imitation of their parents’ and siblings’ use of the toilet, even though they may not yet have learned to control their bladder or bowel. At this point, parents can easily begin to introduce young children to the entire toileting routine: pulling down their pants; sitting on the toilet correctly; wiping their bottoms; pulling their pants up; flushing; and washing their hands. Most children will easily master this routine, just as they learn so many practical life skills in the Montessori classroom.

Their toddlers’ fascination with the toilet leads some parents to put a latch on the bathroom door or secure the toilet lid for fear that their youngsters will play in the toilet, potentially falling in and drowning. This gives the child the message that the bathroom and toilet are forbidden territory. They may simply be attracted to the toilet as a source of water play. It would be better to give them access to water in some other way, such as a preschool water table, a shallow basin, or from a low sink.

Allow children to experiment with flushing the toilet and when you sense that they are curious, explain body functions to them. Respond to their questions with clear, honest answers appropriate to their level of understanding. “Everybody poops. It’s normal. It’s our body’s way of getting rid of that part of our food that it doesn’t need.”

Myelinization is a process in infancy through which the nerves become coated with a fatty substance, myelin, which facilitates transmission of nerve impulses from cell to cell. As the nervous system becomes refined, the growing toddler begins to gain better and better coordination of their movements. This process works from the head down. The developing infant gains control of their head, then arms and the trunk of their body, and eventually their legs and feet. From random movements of the head, arms, and feet, the baby gradually gains the ability to move with conscious intent and control.

This process of Myelinization, or integration of the nervous system, which proceeds on an external level from the head down, is also taking place with the infant’s body. As the nerve cells become Myelinated, just as they gain control of the other voluntary muscles of the body, Myelinization allows control of the sphincter muscles that control the bladder and bowel. Theoretically, these muscles have become Myelinated before the muscles of the legs according to this head down progression. This is confirmed by our observation of young children.

Around eighteen months, children enter a sensitive period in which they can most easily gain control of their now much more developed and integrated nervous system. At this stage, most children have both the physical ability and the interest to control bladder and bowel. If they are given the opportunity to spend as much time as possible in underpants, rather than diapers, they gain a greater awareness of these bodily functions. The absorbency of disposable diapers prevents toddlers from sensing when they have urinated.

During this sensitive period, if the child is in underpants most, if not all, of the time, he will quickly learn to sense when his bladder is full and he needs to go to the bathroom. And there we have it. The child has developed the neuromuscular ability to control his body, his interest in using the potty chair or toilet is activated, and he is well under way in mastering the specific steps involved in using the toilet.

Most children who are put into underpants at this age can be using the toilet consistently within a few weeks or months. They learn this out of their desire to be independent. It is a self-motivated process. The parent can be encouraging and can prepare the environment to support the child when he is ready: using the cotton training pants; allowing access to the bathroom; providing an appropriate way for the child to explore both the use of the toilet and to play with water; their patient explanation of body functions; the provision of old towels for cleaning up accidents; and their gentle understanding when accidents do occur.

Toileting is not something facilitated through the parent’s efforts; thus, we avoid the term “toilet training.” It is, or rather should be, a natural process that grows out of the child’s interest, desire for independence and self-respect, and gradually evolving neurological development. “I did it myself!” Toileting is the child’s work, not his mom or dad’s. They play a secondary and supportive role. Rewards and punishment are both unnecessary and inappropriate!

This sensitive period, in my observation, ends at about 24 months.  As the child gets older, toileting becomes more difficult, and becomes more of an issue between child and parent. It is best to give the child more independence, provide underpants and, ideally, eliminate diapers. The child can then gain this skill and independence for himself.