A Montessorian and a Braver Angel 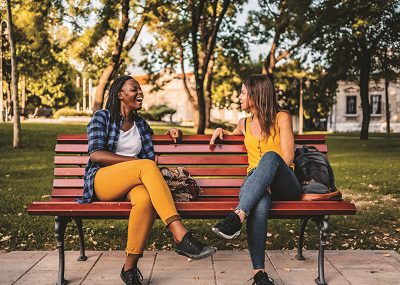 Like many Americans, I was stunned by the vitriol that accompanied the 2016 pre and post-election season. In our deeply polarized country, the expected mudslinging between candidates seemed to extend to everyone. Now Americans were hurling insults, labels, accusations, assumptions, and blame at each other. My own family was politically divided, and some family members were no longer talking to each other. Those that were still talking wanted to ban any mention of politics. News reporting had taken a strident tone, everyone on television seemed to be shouting, and I stopped watching. I realized I had as little understanding of the “other side” as they had about “our side,” and I found within myself a longing to talk with the “others” to try to understand them better. I didn’t want to hear from the pundits. I wanted to talk to people. Instead of avoiding difficult conversations, I wanted to learn how to have them.

One day in early 2017, I heard a voice on a television talk show that my husband was watching in the next room. The man’s name was David Blankenhorn, and he was talking about reconciliation, conversation, unity, and depolarizing America. I joined my husband and listened. Blankenhorn said he and a group of “reds” and “blues” were building an organization inspired by the words of Abraham Lincoln in 1861:

“We are not enemies, but friends. We must not be enemies. Though passion may have strained, it must not break our bonds of affection. The mystic chords of memory… will yet swell the chorus of the Union, when again touched, as surely they will be by the better angels of our nature.”

I joined the organization, now known as Braver Angels, trained as a workshop moderator, and organized workshops in Arizona to bring people together across the political divide. The pandemic required Braver Angels to move all workshops online, and new programs were added. Online Braver Angels national debates have attracted more than 400 people per session. The 2021 pre-inauguration Hold America Together conversation online drew an audience of over 4,500.

As a Montessori educator for over four decades, I have aspired to nurture a peaceful, collaborative, respectful community of learners at our school who care for and are curious about themselves, each other, and the world we share. From resolving conflicts with the peace rose in primary, to engaging in animated community meetings in the middle school, and problem-solving together during staff meetings, we have been learning to talk through our differences, see each other through a lens of compassion, seek understanding, and find solutions. Maria Montessori saw the peaceful Children’s House as a hopeful alternative to the destruction she witnessed in the world of adults in her time. The political challenges of our own time give us an opportunity to apply the community skills we have honed in our Montessori schools and contribute to conversations that bridge the political divide.

For me, Braver Angels has provided an opportunity to engage with people across the political spectrum, to learn how to listen without assumptions, and to see with new eyes people that I previously would have dismissed as hopelessly misguided. I have learned to see beyond stereotypes and have experienced moments of surprise and wonder at the nuances and complexity of each individual’s unique perspective. I may not like the politicians my neighbor supports, but I can still love my neighbor. Braver Angels strives for diversity in its membership — political, racial, generational, geographical, and gender — and has braved national conversations on current topics such as police reform, mask-wearing, reparations, the role of facts in politics, and the cancel culture. These conversations welcome free expression of deeply-held opinions, beliefs, and values within an atmosphere of mutual respect and goodwill. During the pre-and-post-election cycle, and continuing throughout the transition to a new administration, the With Malice Toward None and Hold America Together campaigns have encouraged communities such as civic groups, congregations, and schools to agree that regardless of political outcomes, we will maintain respect for one another and will not let politics divide us or interfere with our work together.

Like our national and local communities, our Montessori school communities include staff and families with a diversity of experiences, beliefs, and perspectives. Braver Angels offers suggestions that I have found helpful in protecting our Montessori community, promoting goodwill, and supporting one another as we each respond in our own way to national and global events:

• Listen. If the topic of conversation turns to politics, slow down, and listen. If they are distressed, acknowledge feelings and give support. If you disagree, seek to listen and learn instead of declare and debate. Listen to understand instead of to change their mind.

• See the person in front of you. This is a person like yourself, not an ideology. Remember to treat others as you would like to be treated.

• Respectfully disengage if you need to. If the time is not right or the conversation doesn’t seem productive, excuse yourself.

• Seek to understand. If you want to have this conversation, keep it respectful. Even if you disagree with the person, be curious. Instead of arguing, be responsive, “I hear you”, “tell me more about that” , “what has been your life experience that has influenced your thinking on that?” Listen for underlying values.

• Accept that differences of opinions and beliefs are ok. Understanding different perspectives and life experiences gives us a broader understanding of our world.

• Be respectful of everyone in the room. Don’t assume that everyone in the conversation agrees with you. We all tend to be less respectful about the other side when we are talking with people from our own side. Avoid stereotypes, labels, and assumptions about the “other”.

• Focus on what we have in common and our shared hopes and dreams. We will continue to work together for our children, our future.

Nirvair Khalsa is the founder (1976) and director of Khalsa Montessori School in Tucson, Arizona and a state co-coordinator for Braver Angels Arizona. She has four adult children and four grandchildren who have all attended or currently attend Montessori schools.