The Opposite of Play 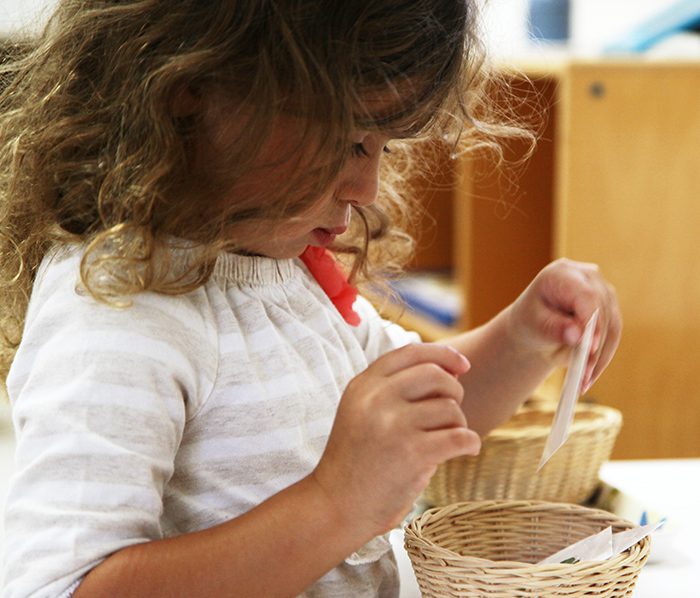 We all know that play is good for children. But research shows that it is integral to the development of their brains and that human beings are, in fact, designed by nature, to flourish through play.

One Montessori myth is that Montessori students are not encouraged to ‘play’ and that they have an overly structured curriculum. In fact, if asked about her day at school, a Montessori four-year-old would proudly recount all the ‘works’ she accomplished: a little Type A personality in training! To compound this myth, early-childhood Montessori students do, in fact, spend a substantial amount of classroom time sweeping floors and washing tables, tasks that we, as adults, would describe as ‘work.’

A Montessori Children’s House is very different from typical preschool programs for young children. You will not find books about fantasy or fairy tales in Montessori classrooms. No dolls. No toy trucks. No make-believe stoves. No dress-up
corner. No garish bright colors.

Is Montessori too work oriented for young children?

Maybe it all comes down to a definition of play and work.

If you have ever observed a young child at play with his favorite toys, you can see that they are quite in tune with the world of fantasy and imagination. They do not need to be taught how to imagine that squirrels can talk or that a fairy princess can fly. They don’t need help with fantasy. When I recently interrupted my three-year-old grandson at play, he gave me an incredulous, frustrated look and responded, “I’m talking to Thomas!” Thomas being “Thomas the Train™.” He was, indeed, talking to a toy train.

Jackson was deeply engrossed in the very worthwhile work of play. He was honing his language skills and was role-playing dialogue, giving life to Thomas. He was practicing social interaction in a safe, non-judgmental environment of his own creation. I also watched him pick up my cell phone, hold it in place with his shoulder, so that he had both hands free to play, and begin to pretend he was talking to somebody about Thomas. He was in the zone and was at peace.

Disaster struck when his younger brother, Hudson, wandered into his ‘work’ zone and moved some train track. Jackson was clearly frustrated and upset that his carefully arranged work had suffered a mishap; however he wanted to continue his ‘work,’ so he asked Hudson to stop. “Hudson, stop!!!!!” Not surprising, Hudson didn’t stop, which caused Jackson to become angry, lashing out at his brother, first with words and then with a push, which ultimately resulted with both kids in tears and the imaginary Island of Sodor in total disarray.

I could have intervened, but I didn’t. Not because I didn’t care. In fact, it would have been in my short-term best interest to have at least tried to keep the peace and avoid the turmoil. But what would I have accomplished, and what would the children have learned from the experience?

We sat on the couch (me in the middle) and took a few minutes to calm down. With what I might refer to as “light intervention,” we returned to the disaster site and together restored the Island of Sodor. Playing and working together is not always easy. Even as adults, we need to feel our way through the complexities of working with others. Sometimes we need to compromise.

Play Is the Work of Childhood

Play is very much the ‘work’ of childhood. It is a time when they experiment with social etiquette and customs, their power over themselves and others, and what it means to be part of a community. One might look at play as practice for skills needed in the future.

In the animal world, play allows young animals to make sound judgments, a rehearsal in which life and death are not at stake. For children, playing with others allows them to learn the difference between friendly teasing and mean-spirited bullying. Research by John Byers (an animal behaviorist) has actually shown that the amount of play is correlated to the brain’s frontal cortex, which is important for the development of cognition. Byers speculates that “during play, the brain is making sense of itself through simulation and testing. Play activity is actually helping sculpt the brain.”

Dr. Stuart Brown, M.D., in his book Play: How it Shapes the Brain, Opens the Imagination, and Invigorates the Soul, describes becoming interested in play after studying a range of people from all walks of life (from murderers to scientists, socialites, artists, etc.). He studied their ‘play histories’ and how the role of play in childhood and adulthood affected their lives.

In studying murderers, he found that the absence of play in childhood was as important as any other factor in predicting their path of crime. He also found that the potential for anti-social behavior in abused, at-risk children was diminished through play.

In today’s culture, with our extreme worry over bullying and self-esteem, we have created a culture of over-protection that was not present thirty years ago. Rough and tumble play actually does have a place in childhood, as it does in nature. Watch two dogs play, gnashing teeth and body slamming with great gusto. While there is a lot of noise and it looks like somebody is going to get killed, all it usually takes is for one dog (or child) to express discomfort. At that point, the ‘play’ stops and the dog (or child) that was too rough recognizes that the play has stopped because it was too much for the other participant.
If it is really ‘play’ and not aggression, the child or dog will make amends to the wounded player and will encourage the resumption of play in some way. If it’s canine play, the stronger dog will bow and wag his tail or roll on his back to show that he can be submissive. If it’s a child, you might see one child offer a toy or hand to the ‘wounded’ child to encourage the play to continue. It’s not about winning. It’s about play.

Dr. Brown describes the properties of play as having the following characteristics:

Play provides us freedom from time and self-consciousness. We are fully in the moment, and outside thoughts are diminished. Play is its own reward.

Most of us can think of an instance where we have completely lost track of time, so deeply engrossed in whatever we were doing. It might have been a time when we were skiing, painting, gardening, baking cookies with our children, writing, or even finding a solution to a problem at work. Yes, at times, even work can meet the definition of play.

When a Montessori child is at ‘work’ in her classroom, a deliberate effort is made to allow her the time and space to delve deeply into her ‘work.’ Children are taught to speak and move quietly in order to respect each other’s workspace. Sometimes a Montessori child’s work will spill over into their home life as well. One time, I found that my four-year-old son had dumped our spare change jar onto the carpet and was busy polishing all the coins with a damp wash rag. When he finished, he put them all back into the jar and then started all over again. Work or play? I’m pretty sure it was play disguised as work.

The beauty of Montessori’s prepared environment is that it is filled with beautiful materials that encourage children to touch and discover their secrets. There are real child-sized tools that allow them to work with water, dig dirt in a garden, and clean their environment. If they were using toys instead of tools to do these actions, we’d all call it ‘play,’ In Montessori, we call it ‘work.’ Is there really a difference?

In the elementary years and beyond, Montessori students are encouraged to find a subject that interests them and to dig in with ‘big’ work, thematic work that transcends any one part of the curriculum. Is it work? Yes, but it may very well meet the ‘play test’ as well.

Just as we model other aspects of behavior for our children, we need to model play. That’s a hard task for many of us. How many of us can go an hour without checking our
cell phone? When we are on vacation, are we really giving complete attention to our family, or are we worried about what’s going on at the office? How often do we do something as a family that is just pure fun?

Adults need play as much as children, but for different reasons. Children need play to help generate their rapidly developing brains. Adult brains have developed, so it is easy to push play aside on a short-term basis, giving priority to responsibilities and work demands; however, when play is denied too long, our mood darkens, our creativity disappears, we develop a sense of hopelessness, and lose our ability to sustain a feeling of well-being.

Dr. Brown uses the analogy of the oxygen masks in airplanes that deploy when there is a sudden loss of breathable air. The flight attendants’ pre-take-off speech always tells us that, when traveling with a child, in the event of an emergency, secure our own life-support first and then tend to the needs of the child. These are good words of advice, applicable to so many situations. “In order to help our children, we have to recover our memories of how we once played by retracing our own early play footprints. When we do that and create a playful household, everything from education to chores will go better.”

For every family, the definition of play is different. While one family may love to hike, another family may get the same pleasure from an afternoon in a bookstore. All of us need to find something that we love to do and give ourselves (and others) the permission to lose ourselves in the bliss of that activity. It restores our spirit and gives us the energy to do other very real work that, while worthy, may not give us as much pleasure as we might wish.

The Opposite of Play

In the opinion of Dr. Brown, the opposite of play is not work; it’s depression. Now that’s food for thought.

I highly recommend Dr. Brown’s book Play: How it Shapes the Brain, Opens the Imagination, and Invigorates the Soul. It is published by Avery and it is available through Amazon. You can even buy it for Kindle™.
Tomorrow’s Child //November 2014 / p 10