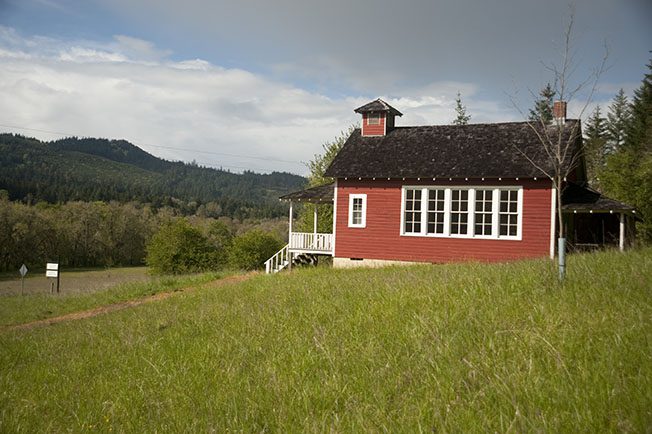 A hundred years ago most schools were very small in comparison with the large elementary schools and enormous middle and high schools that we find across America and in much of the rest of the world.

The one-room schoolhouse was the traditional American classroom model. Classes were multi-aged. Students learned from each other, especially the older students in the class, as well as from their teachers.

Junior and senior high schools were typically combined and commonly had enrollments of less than 400 students. With small enrollments, the choice of friends was limited. One benefit was that school friendships tended to grow strong and last for a lifetime.

Over the last hundred years, this tradition changed, and the one with which we are familiar became the norm. It is worth remembering how this came to be.

Before 1900, less than 10 percent of all students attended high school. Most began school at age six and left after the eighth grade. By 1910, the percentage attending high school had risen to 35 percent, but only 4 percent of American youth went on to college. In the past, high school was seen as preparation for college, and college was simply not seen as being needed for employment in most professions.

As the 20th century dawned, several social movements came together to transform the American educational system, and ultimately influence education throughout the world.

The first was the vigorous progressive drive to improve wages and working conditions in the increasingly urbanized and industrial economy of North America. One aspect was the campaign to discourage businesses and industries from employing children. The goal was both child protection and the elimination of this tremendous and inexpensive pool of labor. This laudable goal was accomplished by making child labor illegal and by requiring parents to send children to school.

The second great impetus to build even larger schools was the great wave of immigrants who came to the United States and Canada from Europe during the 1890s and early years of the twentieth century.

This was also a period of major growth in many industries, from mining to manufacturing, and the labor movement began to organize in response to low wages, long hours, and poor working conditions. This influx of immigrants and labor unrest led to a growing fear of socialism and foreign influences. As immigrant populations gathered in large cities and around industrial and mining communities, free (but compulsory) education was seen as the surest way to turn foreigners into loyal citizens. The public schools became the great ‘American Melting Pot’ and were idealized as a central part of the shared American experience. Whatever the positive outcomes of this trend, it also led to a movement from small independent local schools to large bureaucratic school systems.

As the economy began to shift, young teenagers who did not live on farms began to find it increasingly difficult to find a job, and social and economic pressure led many to stay in school longer.

At the same time, educational reformers saw the need to better prepare young people for the world of work, whether or not they had any interest in going on to college.

Thus, with both a growing population and a burgeoning number of young people between the age of 6 and 16 required to attend public schools, our cities began to find ways to house and educate a rapidly growing number of students.

Finally, to understand how schools grew from small neighborhood settings to modern shopping-mall-sized buildings that can house five hundred and more elementary students, and thousands of middle and high school students, under one roof, we have to remember that in the first half of the twentieth century most of North America was fascinated with industrial efficiency. Henry Ford popularized the idea of the assembly line, but many management experts contributed to the idea of standardization of parts, setting performance expectations, and laying out plans for making entire organizations more efficient.

Many good things came from this process, primarily greater output, technological innovation, and many more household goods and major purchases that have come to shape our lives. There is a direct line from the start of the modern industrial revolution to the cars that we drive, the modern kitchen, the entertainment industry, our cell phones, and the internet. The is also a direct connection between it and climate change, the pollution of our oceans, and the depersonalization of our society, which begins with our schools.

Whatever reasons explain (and perhaps once justified) the creation of large schools, today there is a strong case to reverse the trend.

From both studies and the experience of thousands of smaller public and nonpublic schools, we find that in these more personalized settings, students get a better education and feel more connected to the school community than in the large settings that many of us take for granted. This is true in inner cities and affluent suburban communities. It is true at every level, from elementary to high school. Major education reform groups, such as the Bill and Melinda Gates Foundation, have come to the same conclusion and invest vast sums into supporting the development of new small high school models.

As Jordan Hylden at Harvard University observed in 2004:

They participate more in extracurricular activities, have better rates of attendance, report greater positive attitudes towards learning, and are less likely to face school-related crime and violence.

Their teachers report greater job satisfaction and are more likely to feel as if they are succeeding in their work.

Their administrators and teachers are often more able to identify problems, respond innovatively and effectively, and adapt to change.

Their parents and relatives are more likely to become involved in the school.

Small schools are often characterized by personalized attention, curriculum integration and specialization, relational trust and respect, a student’s sense of belonging, a strong positive ethos, greater accountability, and a sense of communal mission.?

The point that I want to make is that bigger is not necessarily better, especially when it comes to designing schools. But large schools have become the norm.

Endless numbers of movies and television sitcoms showcase large public middle and high schools. Children take for granted that this is the way things are supposed to be. All through elementary school, many children long for the day when they can make the rite of passage and go to a big school. In affluent communities, the modern secondary level campus is shiny and new, and costs enough to keep property tax rates higher than ever.

Public education enjoys almost universal support from the American public. We take pride in our large schools. On the other hand, we hear conflicting messages from all sides, most commonly that our country’s students are falling further and further behind those of much of the rest of the world. We decry the state of schools today in America as a whole while reassuring each other that our local schools are among the best in the nation.

The seemly obvious solution is to spend still more money on our schools. There are inequities still to be found in American public education. Some districts have much greater resources, and some schools are grossly underfunded. But the evidence of the last several decades is that much of the money invested had led to modest outcomes in terms of overall student learning and the emotional climate within our schools. We have much more large modern buildings, Ipads, laptops, Smartboards, and educational technology that looks and sounds good but is not the direct link to deeper learning. Education is still centered around the direct relationship of children and adults who know how to facilitate their learning.

We hear snide jokes about the wasteful spending of the government, forgetting that the biggest spending arm of our government is typically right in our own community, where the public school system is often the largest employer in town and usually spends almost as much on centralized administration as on its classroom programs.

In recent years, technology is often seen as the answer, forgetting the wisdom of this old truth:

Children learn best by doing, and they learn best of all within a school setting in which they feel safe, respected, and emotionally connected to their teachers and fellow students.This is very difficult to do in a school system that is obsessed with state-mandated standards, constantly changing curriculum, high-stakes testing, and students who are trained to follow instructions rather than think deeply and become engaged in their education.

Smaller School Size Is Not Enough

There are obvious trade-offs with a smaller enrollment. With fewer students and teachers, it becomes difficult to offer as many extra-curricular programs and widely varying courses of study.

But how much is enough? Which is more important: a choice among thirty different social studies courses or a school in which you find your own voice, live and work within a strong supportive community, and, as a young person, feel that adults really listen and treat you with kindness, warmth, and respect?

Today, many charter and private schools are increasingly specialized, offering families a greater range of choice. Smaller schools that put children at the center, rather than the teachers’ lesson plans, tend to create far more humane, kind, and effective educational outcomes in the long run, not only in terms of what can be measured on test scores, but in terms of the quality of relationships, character, and ability to work together to get things done.

It is time to go back to the good old days when schools were small, and everyone knew your name.