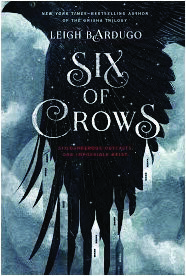 If you like complex characters, a thrilling story, and Victorianesque setting, then you will love Six of Crows by Leigh Bardugo. This book tells the story of a convict, a sharpshooter, a runaway, a spy, a heart render, and a thief who band together to pull off an impossible heist.

Six of Crows takes place in the Grishaverse, a world where certain people called Grisha have the power to manipulate the tides, the wind, or even the chemicals in your body. Every chapter in this book follows the story from a different character’s point of view. The narrative switches between Kaz Brekker, a criminal underworld mastermind; Jesper, a sharpshooter, who can’t walk away from a bet; Wylan, the runaway son of a rich merchant; Inej, a circus performer turned into a deadly assassin; Nina, a Grisha heartrender far from home; and Matthias, a Drüskelle, witch hunter, and a convict. All of them must put aside their differences to complete an impossible heist, not only to save the world but for the money.

The first half of this book takes place in the city of Ketterdam, a city based on Amsterdam, specifically in The Barrel, the part of town with all the gambling halls are where anyone will do anything for the right price. The Barrel is home to thieves, conartists, and, most importantly, gangs. It’s a place where everyone is trying to outsmart everyone else. The second half takes place in the faraway country of Fjerda, a cold unforgiving country filled with Drüskelle. Overall, I loved the setting; I just wish we could have explored The Barrel more. Kaz, also known as Dirtyhands, is a lieutenant in a gang called the Dregs. Inej is a kind, yet dangerous, Suli acrobat who, through a series of unfortunate events, finds herself an assassin. Jesper is a jittery and funny sharpshooter, who can’t walk away from a wager. Nina is decisive and independent. Matthias is cold and a good soldier. Wylan is the moral compass of the team.

Six of Crows is a must-read for anyone who enjoys thrilling, suspenseful, and magical books. With its complex characters, engaging, and intriguing setting, Six of Crows is not only a good book but a masterpiece.

In the book Matched, a girl named Cassia lives in a tightly controlled society where decisions are made for her. Officials decide, no one else. They decide whom you love, where you work, when you die, and more.

Ally Condie’s husband gave her the idea to write the book, Matched. She had a conversation with him about marriage in the fall of 2008. He asked, “What if someone wrote the perfect algorithm for lining people up, and the government used it to decide whom you married, when you married, etc.?” But some of Condie’s inspiration also came from general experiences, such as becoming a parent and falling in love.

The main characters in this book are Cassia Reyes and Bram Reyes, Bram and Cassia’s parents, Cassia’s grandfather (Xander), and Ky. My favorite character is Cassia’s grandfather (aka Samuel Reyes) because he’s so sweet and he understands Cassia. He’s kind and gentle to everybody, and he loves poetry. In this story, Samuel is always there for his family, as well.

Matched is definitely one of my favorite books. It’s very well written and interesting to read. The book has many unexpected twists, turns, and lies that make you need to keep reading. If I could change one thing about this book, I would change something that happens to Cassia’s grandfather. If you want to know what happens to him, you should read the book!

I highly recommend this book because it opens up your mind and makes you more grateful to know that you aren’t always being watched or monitored at all times. It’s so crazy to think how free we are compared to these people who live in a place where they’re just like everyone else—from clothes, to school, to work, and even to falling in love. If you’re the type of person who likes family, adventure, fantasy, and love, then I believe that this would be the perfect book for you!

Flowers for Algernon is highly acclaimed, having earned the Nebula Award for Science fiction and Hugo award for best novel and considered a classic by many. Written initially as a short story in 1959, it was later expanded into a novel in 1966. The book challenges the status quo of science fiction, focusing not on laser guns, but on the human mind. When it was released in 1959, it changed the very definition of science fiction. However, besides the science aspect of the book, it also has a more important message about humanity.

The story follows Charlie Gordon, a developmentally delayed man who wants more than anything to be smart. When two scientists choose him to be part of a science experiment meant to raise his IQ, his view of the world is completely changed. Now he has to deal with the difficulties that come with intelligence and the painful memories that begin to manifest in his head. I won’t say that this book will change your life, but it should definitely make you think. For me, Flowers for Algernon really pulled at my heartstrings and made me feel emotions that few books have been able to elicit.

Before I elaborate more on the story, I would like to mention that this book is not for kids any younger than secondary school age or those who are afraid to feel a little uncomfortable. The reason I say this is as Charlie remembers more and more of his past, the book takes a darker turn. There are also some slightly mature moments in the second half of the book.

Charlie’s character goes through multiple changes as his intelligence increases. He starts off as a man who has the mind of a kid, working at a bakery owned by a family friend. This is the only place he is able to work, and the owner acts as a father figure to him. He can’t remember anything and is constantly bullied by the other workers. Then, when he receives surgery that slowly increases his intelligence, his character completely changes. He becomes a hyperintelligent person who remembers everything and is able to learn twenty different languages, but now he realizes everything that has happened to him in his life. He now understands that he was previously living in the moment but not able to understand the moment. He had no control over his life, yet now he does, and he’s impossibly frustrated by this. People treat him completely differently and are scared of him. He’s mad at the world, at people, and at his circumstances. He only finds true companionship with the lab mouse, Algernon, that was the scientists original laboratory test subject.

A cool aspect of Flowers for Algernon is how the book itself is written. The story is told in the first person and is written in progress reports by Charlie. This gives the reader a new way to look into the protagonist’s mind, and I really enjoyed reading something that is written so uniquely.

One of the major reasons why I truly recommend this book is its great message. It shows that people who have mental disabilities are still people. We shouldn’t treat people differently just because they struggle with simpler tasks. If anything, we should support them and help them like we would any other person.

Between Shades of Gray

“Have you ever wondered what a human life is worth? That morning, my brother’s was worth a pocket watch.”

Between Shades of Gray is a historical fiction novel written by Lithuanian-American writer, Ruta Sepetys. Sepetys’ heritage inspired the creation of Between Shades of Gray, her first novel. This chilling novel is centered around the soul-crushing events of the sovietinvasion within the country of Lithuania in 1941. During this time, soviet police took men, women, and children and dispersed them wherever they pleased, all while leaving the captives uninformed of their destination. The soviets would tear families apart, leaving them to question the fate of their loved ones. The soviets essentially forced the Lithuanians to live as slaves under extremely harsh, inhumane conditions, while having to comply with every order given to them; if they failed to comply, it could mean instant death.

Between Shades of Gray begins with backstory on Kostas Vilkas. Kostas is the husband of Elena and father to Lina and Jonas. Like many other able-bodied men, he was taken and separated from his wife and children. His wife, Elena, is an intelligent and caring woman. Elena can be seen taking on the role of the voice of reason, as well as being a source of positivity. Their daughter, Lina, is a young teenage girl with a passion for art, only 15, when she and her family were taken from their home. Lina’s younger brother, Jonas, was only ten years old when their family was taken. Although they do have their mother by their side the majority of the time, both Lina and Jonas are forced to grow up extremely quickly due to the hardships they face within their situation. However, when the children briefly reconnect with their father, bumping into him in a nearby train car, Kostas gives the children words of wisdom, telling them to stay strong and not to give up. This empowers Lina and Jonas, making them want to keep going despite all their struggles.

The family, minus the father, was forced aboard a train headed towards Siberia. Here, they meet many fellow Lithuanian captives; most memorably, they meet Andrius Arvydas.

Andrius is around the same age as Lina, and during the novel, they become love interests. The family also meets Mr. Stalas, Mrs. Grybas, Ona, and others. They all soon come to be familiar with Komorov, the commander. It seems as if Komorov is the embodiment of evil; he is the main antagonist. Along with the commander, the Lithuanians also get to know Nikolai Kretzsky. Kretzsky is another soldier who takes part in torturing and ordering the captives around. However, as time progresses, Elena strikes an odd friendship with Kretzsky and it’s revealed that he isn’t completely evil.

Between Shades of Gray demonstrates many important themes, including: morality, sacrifice, integrity, strength, and much more. I love watching the characters develop and grow throughout their story. Each character looks at what it was like to be a captive in the mid 1900s from different perspectives; and you are somewhat put into their shoes. I especially appreciate that, to create this novel, Septeys interviewed real survivors of this time. The fact that everything happening directly stems from those peoples’ truths gives the story life; it gives the story more real feelings and emotions. It shows a more historically accurate representation of their hardships. Their stories must be shared, and the way Septeys delivers their stories is beautiful. Septeys makes the story more personal, incorporating thoughts directly from the protagonists’ minds.

Septeys brings to light the crushing tragedy of the persecution of Stalin’s victims in such a way that is extremely powerful and full of raw emotions. This novel covers such a real and touching topic, I would direct the novel to a more mature audience. Anybody who enjoys more intimate, emotional novels will love this book. Be warned, Between Shades of Gray is a rollercoaster; you better make sure to buckle up.

Ninth and tenth grade students at NewGate School are reading and writing like crazy! Writing reviews for real publications provides students with an authentic reason for writing. Do you have students or children who would like to send in reviews? For submission guidelines, contact: lornamcgrath@montessori.org.