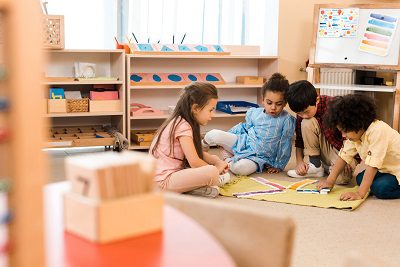 Normalization is a term that Montessori teachers exhaust at the beginning of each school year.

“The children are normalizing.”

“Normalization is a delicate process.”

But what is normalization?

Dr. Montessori described normalization in this way: “And in these qualities of the child, she sees man as he ought to be: the worker who never tires, because what drives him on is perennial enthusiasm. She sees one who seeks out the greatest efforts because his constant aspiration is to make himself superior to difficulties; he is a person who really tries to help the weak, because in his heart there is the true charity which knows what is meant by respect for others, and that respect for a person’s spiritual efforts is the water that nourishes the roots of his soul. In the possession of these characteristics, she will recognize the true child, who is father of the true man.” (p. 257).

These are some of the faces of ‘normalization.’ The children are demonstrating independence, perseverance, repetition, and concentration to the exclusion of all the sights, sounds, sensations, and activity around them, because they have a greater task at hand. The children are constructing their own learning; they are shaping their own personalities; and they are building the adults that they are yet to become.

Anika places a large pink cube atop a small pink cube and the cubes fall. She removes the large cube and chooses another somewhat smaller cube. This cube also falls. She removes the small cube and replaces it with a larger cube. She places the smaller cube atop and, later, the smallest cube at the top of the tower. She sits back, observes her balanced tower, and her eyes sparkle as she smiles. one who seeks out the greatest efforts because his constant aspiration is to make himself superior to difficulties; he is a person who really tries to help the weak, because in his heart there is the true charity which knows what is meant by respect for others, and that respect for a person’s spiritual

To the onlooker, it appears that the children are cleaning, building, and working on skills. They appear to be manipulating letters, numbers, and tablets of color. They carry long red rods, stack pink cubes, and lug heavy brown pieces of wood to awaiting throw rugs. These observations are accurate; however, the process of normalization involves a great many skills, some that are visible and some that are less obvious. These children (and others like them) are learning, growing, and developing in a specially prepared environment that fosters the love of activity, concentration, self-discipline, and sociability. This process is facilitated by a sensitive adult, who has prepared the environment with order, consistency, warmth, and the removal of obstacles that could prevent this development.

Martin enters his classroom, says hello to a few friends, and walks directly to the shelf that contains the materials necessary for the parts of the tree puzzle. First he retrieves and unrolls his rug with attention to its position and smoothness. Then he gathers his puzzle and places it on the rug. He builds, disassembles and rebuilds his puzzle without fatigue, but with joyful energy.

Dr. Montessori’s discovery of the “secret of the child,” i.e., their hidden potential, had yet to be revealed and understood by adults. Dr. Montessori’s skills in observation and the circumstances that placed her in the company of children in need of a place to call their own (the slums of San Lorenzo, Rome) found a fertile place for the revelation to occur. She shared with her adult students at the second Indian Montessori training course, that the children came “undernourished, dirty, and uneducated.” “And these very small children, from three to six, did wonderful things. They had wonderful revelations. All these revelations of how to learn to write and to read by themselves at such a young age (and in the midst of joy) resulted in a transformation of their character.”

Liam is building the triangles with deep concentration. Somewhere in the room a tray falls, a child coughs, and an adult walks past. Outdoors a horn sounds and a truck rumbles past. Meanwhile, he continues the assembly of the triangles, the triangles that he has constructed many times before, without interruption.

Then and today, children enter Montessori settings with capabilities that suit them for the work and activity they will encounter. They bring bodies designed for purposeful movement, coordination, grace, and stamina. Their hands and senses serve them by allowing them to interact with and come to experience their environments. They are equipped with a mind that absorbs impressions from all around them; a mind that organizes, problem solves, adapts, remembers, is curious, is capable of long periods of attention and concentrates with little effort and without fatigue. When the body and the mind are satisfied, the true character of children is disclosed. They are peaceful, joyful, sociable, helpful, self-disciplined, satisfied, and their inquisitive and loving souls are made evident. ¢

Dorothy Harman is an AMS Early Childhood credentialed Montessori guide. She holds a BA in Early Childhood Education and a M. Ed in Curriculum and Instruction with an Emphasis in Creative Arts. Dorothy Harman serves as a Montessori consultant and Adjunct Lecturer at the University of Nebraska- Kearney. She serves as a Field Consultant for the Center for Guided Montessori Studies and was a 2018 recipient of an AMS Peace Seed Grant. She is the author of Intentional Connections: A Practical Guide to Parent Engagement in Early Childhood and Lower Elementary Classrooms, published through Parent Child Press.