The Importance of the Kindergarten Year 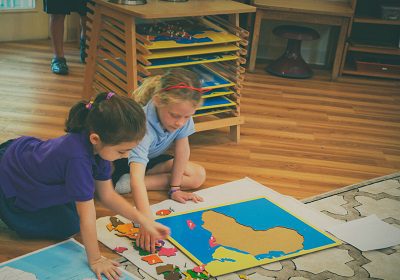 Every year in January, one of us will write an article about the importance of children who are turning five completing the three-year cycle of the Montessori Early Childhood program. We do this because this is a decision that is truly important for any child who has grown up, thus far, in a Montessori program.

We understand how tempting it is, for parents who have their children enrolled in a non-public Montessori school, to make the switch at Kindergarten to avoid another year of tuition. However, having invested in Montessori thus far, the long-term benefits of staying, at least through the third year, if not beyond, cannot be stressed often enough.

The third-year is critical in the Early Childhood Montessori program. This is the year when children’s earlier experiences are normally internalized and reinforced and when children begin to take the first steps of moving from very concrete learning to learning that is more abstract. When children leave Montessori for traditional Kindergarten, much of what they have been learning fades away because they have not yet made the passage to abstract understanding.

The advantages of using the local schools often seem obvious, while those for staying in Montessori are often not at all clear. When you can use the local schools for free, why would anyone want to invest thousands of dollars in another year’s tuition?

It’s a fair question, and it deserves a careful answer. Obviously, there is no one right answer for every child. Often the decision depends on where each family places its priorities and how strongly parents sense that one school or another more closely fits in with their hopes and dreams for their children.

Naturally, to some degree, the answer is also often connected to the question of family income as well; although, we are amazed at how often families with very modest means, but who place a high enough priority on their children’s education, will scrape together the tuition needed to keep them in Montessori.

Most five-year-olds have been waiting for the longest time to be one of the ‘big kids.’ The experience of playing the leadership role does wonders to reinforce the five-year-olds’s sense of autonomy and self-confidence.

So here are a few answers to some of the questions parents often ask about Montessori for the Kindergarten-age child.

In a nut shell, what would be the most important short-term disadvantage of sending my five-year-old to the local schools?

When a child transfers from Montessori to a new Kindergarten, she spends the first few months adjusting to a new class, a new teacher, and a whole new system with different expectations. This, along with the fact that most Kindergartens have a much lower set of expectations for five-year-olds than most Montessori programs, severely cuts into the learning that could occur during this crucial year of their lives.

As children begin their third year in Montessori, their understanding of the decimal system, place value, mathematical operations, and similar information is usually very sound. With reinforcement, as they grow older, these concepts become internalized and a permanent part of who they are. When they leave Montessori before they have had the time to internalize these early concrete experiences, their early learning often evaporates because it is neither reinforced nor commonly understood.

What would be the most important advantages of keeping my five-year-old in Montessori?

Montessori is an approach to working with children that is carefully based on what we’ve learned about children’s cognitive, neurological, and emotional development from more than one hundred years of research. Although sometimes misunderstood, the Montessori approach has been acclaimed as one of the most developmentally appropriate models by America’s top experts on early childhood and elementary education.

One important difference between what Montessori offers the five-year-old and what is offered by many of today’s Kindergarten programs has to do with how it helps the young child learn how to learn.

Educational research has increasingly shown that students in many schools don’t really understand most of what they are being taught. As Howard Gardner, leading educational psychologist and advocate of school reform, wrote: “Many schools have fallen into a pattern of giving kids exercises and drills that result in getting answers on tests that look like they understand.

Most students, from as young as those in Kindergarten to students in some of the finest colleges in America, do not understand what they’ve studied, in the most basic sense of the term. They lack the capacity to take knowledge learned in one setting and apply it appropriately in a different setting.”

Montessori is focused on teaching for understanding.

In an Early Childhood Montessori classroom, three- and four-year-olds receive the benefit of two years of sensorial preparation for academic skills by working with the concrete Montessori learning materials. This concrete sensorial experience gradually allows the child to form a mental picture of concepts, such as: How big is a thousand? How many hundreds make up a thousand? and What is really going on when we borrow or carry numbers in mathematical operations?

The value of the sensorial experiences that the younger children have had in Montessori has often been underestimated by parents and educators. Research is very clear that young children learn by observing and manipulating their environment, not through textbooks and workbook exercises. The Montessori materials give the child concrete sensorial impressions of abstract concepts, such as long division, that become the foundation for a lifetime of understanding.

But won’t my five-year-old spend her Kindergarten year taking care of younger children instead of doing her own work?

No, not at all! When older children work with younger students, they tend to learn more from the experience than their ‘students.’

Experiences that facilitate development of a child’s independence are often very limited in traditional schools.

Five-year-olds are normally the leaders and role models in the Primary Montessori classroom. They help to set the tone and serve as an example of appropriate behavior for the class. They often help younger children with their work, actually teaching lessons or correcting errors.

Most five-year-olds have been waiting for the longest time to be one of the ‘big kids.’ The experience of playing the leadership role does wonders to reinforce the five-year-olds’s sense of autonomy and self-confidence.

Five-year-olds are beginning to reflect upon the world. They pay closer attention, notice more details, ask more questions, and begin to explain the world in their own terms. The Kindergarten year is a time when the child begins to integrate everything she learned in the first few years.

Academic progress is not our ultimate goal. Our real hope is that they will feel good about themselves and enjoy learning. Mastering basic skills is a side goal.

The key concept is readiness. If a child is developmentally not ready to go on, he or she is neither left behind nor made to feel like a failure. Our goal is not ensuring that children develop at a predetermined rate, but to ensure that whatever they do, they do well and feel good about themselves as learners. •