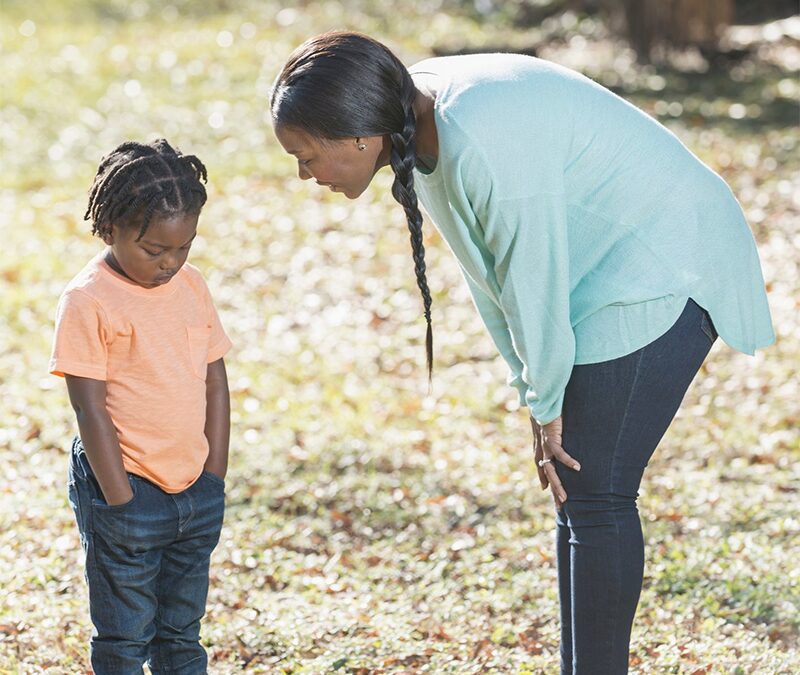 Limits tell your family under what condition you are willing or unwilling to do something. They tell your family where you “draw the line.” They tell what you will or will not tolerate. Their purpose is to take care of you. Limits are not designed to control or manipulate someone else’s behavior. Here are three examples:

Example 1. A mother was playing basketball with her two teenage sons. The boys were getting competitive and soon the game wasn’t fun. Mother announced, “It is not fun for me when you two fight. When you are ready to make it fun again, come and get me. I’d love to play again.”

Example 2. Children need you to set limits so that they can recognize and respect other people’s limits. I was holding hands roller-skating with my daughter. She said in a very demanding tone of voice, “Skate faster!” This wasn’t the first time I had noticed that she was being demanded, so I said, “I am unwilling to have you talk like that to me. It makes me feel like not cooperating with you, and if you continue, I will skate by myself.”

Example 3. A daughter asked her mother to take her to the video store and rent a movie. Her daughter had already spent her allowance that week. Mom said, “I’d be willing to take you to the video store, but I am unwilling to rent a movie for you.” Limits give others important information about you to help them know what they can or cannot expect from you. They are about you, not about criticizing someone else’s behavior or about trying to make them act in a certain way.

Why Do Children Need Limits?

Children need you to set limits so that they can recognize and respect other people’s limits.

Limits provide a sense of security. When children don’t know your limits, they feel lost in an abyss. They feel confused and sometimes literally bounce around trying to find some.

Limits make children feel that we care about them. Children that are raised without limits often feel abandoned.

Children need limits to help them define themselves. Limits set by parents help children clarify their own limits because they have seen your model.

Limits help them to learn what is socially acceptable and what is not.

Children need to learn that if they go past a certain point, there will be consequences. Some of
them may be serious.

You may want to set limits on the use of your belongings, TV watching, bedtime, your time, the use of profanity, mealtime, chores, care of pets. This is not a conclusive list. Make a list of your important issues.
How Do We Know When Our Limits Are Being Violated?

The best clue to determine whether or not your limits are being violated is by being in touch with your feelings.

If any of the following feelings sound familiar, you know that your limits are being dishonored or that you are not being clear about them:

I feel anger, resentment, imposed upon, smothered, taken advantage of, and/or abused.

I feel as if I am pulling more than my fair share of the weight.

I feel as if I am being divided between two people I love.

I feel taken for granted.

Why Do We Have A Difficult Time Setting Limits?

Our ability to set and follow through with limit setting will be largely determined by how we were parented as a child. Setting limits may be difficult for you if you were in any of the following situations:

Not having any limits as a child, being unsupervised.

Being given messages, such as: Don’t make waves; Children are to be seen and not heard; You are being selfish.

If you were told it wasn’t “nice” to assert yourself.

If there was abuse in the home or at work that was mental, physical, emotional, sexual, drug or alcohol related.

If there was someone in your family that you had to give up your needs for because they were sick or disabled.

If self-sacrifice was modeled and expected of you.

If intimidation was used to motivate you.

If you don’t set limits because you don’t feel you deserve them.

If you feel guilty about your own actions such as, working too much or getting a divorce.

What We Do Instead Of Setting Limits?

Because we are afraid of creating conflict, we often choose one of the following behaviors rather than setting limits We are afraid the other person will get angry, leave us, or reject us. We may even feel that what we say or do will not make a difference anyway. Instead of directly setting limits, we sometimes indirectly handle these situations by:

Deny it (act or pretend as though it didn’t happen).

Ignore it and hope it’ll go away.

Talk yourself out of how you are feeling (I shouldn’t feel that way because of … ).

Make excuses for the other person’s behavior (he only said that because he was tired).

Ruminate about the issue (Going over and over the event in your mind, trying to make sense of it).

Blame yourself (if I had only done … he wouldn’t act this way).

Hide behind righteousness (I’m above having those feelings).

Pretend that you don’t care.

Withhold your love or your communication.

What Can We Expect When We Start Setting Limits?

When you first start setting limits, you can expect that your children’s behavior will get worse. They will test you. They will try everything in their power to get you to go back to the way you used to be. So, make sure your seatbelt is fastened. You may be going for a ride!

1. Honor your feelings. Remember, feelings are neither right nor wrong.
They just are.

2. Get clear about what you want. What you are and are not willing to do.

3. Present the information to your family member using an “I” statement. For example, “I am unwilling to wash clothes that are not in the hamper.” There should be no blame, shame, guilt, exaggerations, or complaining. Do this step as soon as possible to prevent an unnecessary build-up of resentment.

4. Be ready to ‘stick to your guns.’ Be consistent and follow through.